The Corkman newspaper this week has run a summary of the headlines of the Millstreet Matters column for the years 2000 – 2001. What happended ten years ago doesn’t feel that long ago at all. It is in two parts, and can be read on their website:

Revellers take to the streets to welcome in the new millennium.

The Euro currency comes into place.

Cork Football lost one of its most ardent champions on the death of the legendry Denis “Toots” Kelleher.

Monsignor Timothy Carroll SMA appointed to the position of Apostolic Vicar for the vicarite Of Kontagora located in the north west of Nigeria.

350 year old Battle of Knockbrack remembered on the unveiling of a monument at a site on the Banteer/Rathcoole road.

Rathcoole horse and pony racing revived for the first time in 70 years.

The Chernobyl Childrens Project benefited from the release of a new CD “Thru My Tears”by Nellie Healy.

Norma Carroll’s gold medal in the Irish Taekwon Do Championship, bronze in the World Championships and reaching the podium in Britain and Germany earns the Female Competitor of the Year and a Sports Bursary in CIT.

Throngs skate into Millstreet for the Disney on Ice spectacular.

The prized Duhallow magazine Seanchas Duthula lives on and its 13th edition is launched in Cullen Community Centre.

The fascinating story of the legendry O’Sullivan Bere march commemorating the 400th anniversary of their trawl in the height of the winter in 1602/03 and its re-inactment met with an overwhelming response in Millstreet and Carriganima.

Sadness on death of Cork and Millstreet football great Din Connors in Boston.

Jerry Doody comperes the proceedings at All Ireland Scór Finals in Castlebar.

Acute disappointment on the announcement that the Creche and Youth Centre facilities are to close.

Gallant Millstreet bow to a sharper Kilbrin in a thrilling Duhallow JAHC Final.

THE special collection for the victims of the Tsunami Diaster taken up in Millstreet Parish reached in excess of €18,600.

An appeal to assist Rathcoole native nun Sr. Mary Lucey in her endeavours to assist the less fortunate in the African mission fields came up trumps highlighted on the presentation of a €18,000 cheque.

The Treble Years success by Millstreet u21 football teams between 1984-86 celebrated.

Millstreet bow to a sharper Freemount in a closely contested Duhallow JAHC Final.

Millstreet marks the 90th Anniversary of the 1916 Easter Rising and those involved in the War of Independence at the official refurbishment of its National Monument in the Town Square.

Census confirms Millstreet holds the highest ratio of Polish population in Ireland with 14%.

Willie Neenan chosen as the worthy recipient of The Corkman Hall of Fame Sports Award.

Disney on Ice returns to Green Glens Complex as audiences far and wide get the chance to escape to a world of make-believe for “Princess Classics”.

The years melted away at the Golden Jubilee celebration of Millstreet ICA.

Five Murphy brothers step forward for a head shave in an overwhelming success for Parkinsons.

A relaxed festive atmosphere prevails for The 73rd International Camping and Caravanning Rally that returns to the Green Glens location. 37 camping and caravanning clubs from 24 different countries attend, over 3300 visitors descend on Millstreet for the duration of the rally.

Cullen celebrates the centenary of the 100th anniversary of its Church of the nativity of the Blessed Virgin Mary with dignity and a great sense of elation.

Regret in death of former county councillor John B “The Shamrock” Murphy.

Patrons either side of the County Bounds take the trip to the Rathmore Marian Players 21st Anniversary pantomime “Puss n Boots”.

Thousands from all parts of the country descend on the Green Glens Complex to view the wonderful Highschoolon Ice.

A step in the restoration of St Patrick’s Church sees the signing of contract in Millstreet Presbytery.

Cullen pays tribute to Batt O’Keeffe TD on his appointment as Minister for Education.

Cloughoula folk come out in force for the retirement of national school principal Annablle O’Sullivan.

Cullen and District Special Needs Association cloak themselves in glory to collect the €10,000 prizemoney in the AIB Better Ireland Programme.

Night at the Dogs supports Church Restoration Fund. Millstreet and the greater community was left saddened by the death of one its most respected personalties Tadhg O’Drisceoil of the Square.

Alter Girls introduced to serve at masses for the very first time.

The Millstreet and district farmers calf sale in aid of the Millstreet Restoration Fund reaches a conclusion on the sale of upwards of 100 calves at Macroom Mart.

The Cork and Kerry clash in All Ireland senior football final sees RTE cameras visit Millstreet Presentation Convent National School for a slot in RTE’s Up for the Match programme.

Ballydaly celebrates 80th anniversary of the blessing and opening of Our Lady of Lourdes Church.

A Night at the Castle supports Baby Jacob. 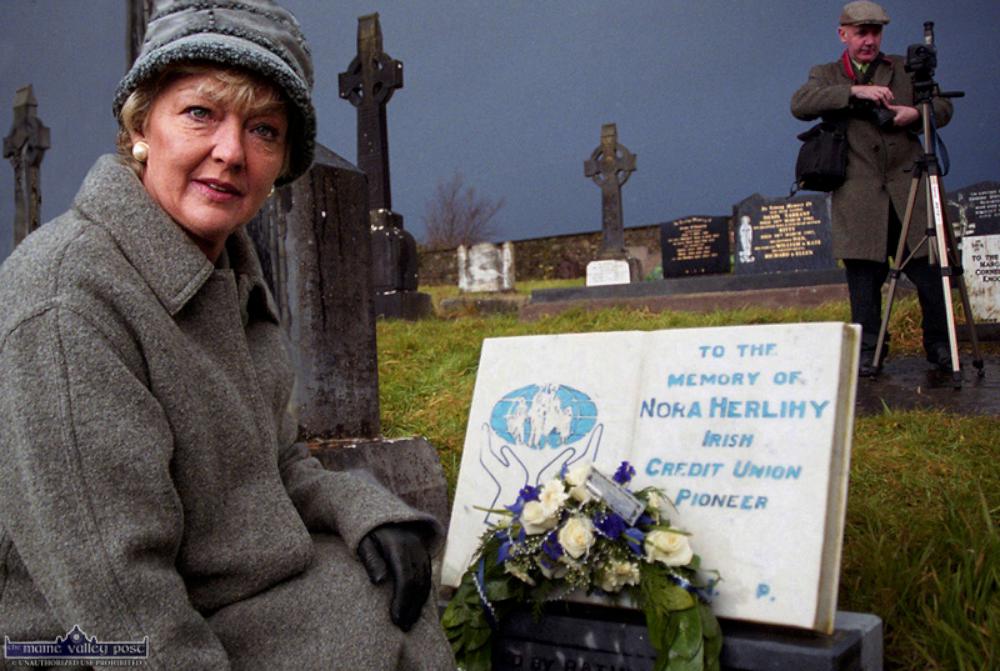 Marian Finucane pictured at the graveside of her ancestors in Ballydesmond in November 2000 during the wreath laying ceremony to the memory of her aunt, teacher and Credit Union pioneer, Nora Herlihy. The man in the photograph is historian, Seán Radley from Millstreet.  27-11-2000