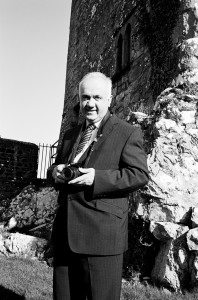 For the last 40 years Seán has single-handedly photographed and documented community life in Millstreet, Co. Cork, the town where he was born and raised. Although he works as a special needs teacher, the rest of his life has been dedicated to photographing the important events in the lives of individuals, and the changing social and physical landscape of the town. His interest in his community, and in documenting it has had a major impact on the Millstreet community. He founded the Millstreet Museum, the Millstreet Museum Society, and he has selflessly given his time on weekends to keep the museum open. In the last few years, Seán has also started a local television station, another successful venture to which he has selflessly given his free time. His dedication to the people of Millstreet and his positive interest in community activities exhibits what true volunteering is all about – interest in and care for others. His work has had a major impact on the self-pride of this community, on the museum, and should be recognised nationally as an excellent documentation of Irish rural and small town life. His keen interest in all aspects of life makes him a pleasure to meet. Seán says, “As Voluntary Curator of Millstreet Museum since 1980 it had been a truly wonderful privilege to have worked with such a dedicated team of Voluntary Enthusiasts over the years.   Encouraged by the uplifting public support from our local Community, preserving the Past and placing focus on the importance of Local History in our area has become a very real labour of love.”

There are 2 other nominees who are not a million miles from Millstreet: Jerh O’Donoghue, Social Action Group, Rathmore, and Jack Roche, IRD Duhallow, both of whom are in the i-Care about the Community section.

Visit the Ireland Involved website, and have a look at the full list of nominees for this year.

The Corkman newspaper has an article this week on Jack and Seán’s nominations.

update 6/Nov/09: Seán unfortunately did not win the top prize on the night. The Independant this morning carries the news that Christine Buckley was presented the award by an Uachtaráin Mary McAleese last night, though we do not know how he fared in his own category. Christine went on to represent Ireland in the European finals and won that also.