END_OF_DOCUMENT_TOKEN_TO_BE_REPLACED

RTE have posted video of “Up for the Match” that was shown last night on RTE1 and included a segment from the Town Park, and the Presentation Convent School. 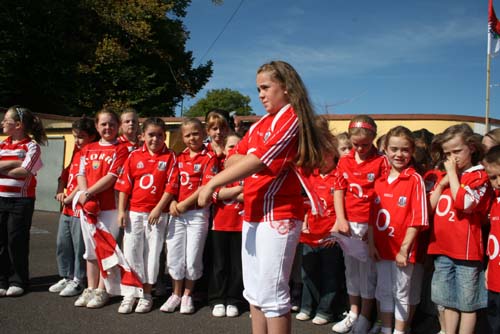 Move the video forward to 41:30 and the part from Millstreet is shown, featuring the poem “Plastic Kerryman” written by Jerry Lehane and read by Chloe Collins. The segment ends at 43:45.

The video is only available until October 10th.

In today’s Sunday Independant, there is a brief mention of the rivalry along the Cork-Kerry Border in Millstreet and Ballydesmond:

Border communities have revelled in the build-up — with Ballydesmond and Millstreet a sea of red and white — while, just across the county bounds, Rathmore and Lauragh are bedecked in the Kingdom’s green, white and gold.

Such is the rivalry — and close connections — between the two counties, that even schools are split straight down the middle with their loyalties.

In Millstreet, the rivalry has been given a little ‘divine’ twist by the fact that while the town is proudly located in Cork — in all spiritual matters it belongs to the diocese of Kerry.

Parish priest Canon Declan O’Connor admitted the divided loyalties have added a good-humoured edge to today’s showdown — but, unlike many of his parishioners, he will be cheering on Kerry.

Ballydaly native Jerry Lehane, even used the fevered border rivalry to pen a classic poem dubbed ‘The Plastic Kerryman’ — the moral of which is that if you’re on the Rebel side of the border you’d better cheer on Cork or relocate back to the Kingdom.