On Saturday the 15th August 2009 the Cullen Pipe Band under the Pipe Major of Con Houlihan took part in the World Pipe Band Championships 2009 held in Glasgow Scotland. The band competed against 29 other bands from all over the World in Grade 3A. All members competed brilliantly and the band was rewarded with 6th place and was presented with the Corby Cup. Most members had been in Glasgow since the previous Wednesday the 12th of August in preparation for the weekend. Members took part in twice daily practices and this takes up a lot of dedication and effort so we thank all members for their great dedication and effort.

Other band achievements this year include the drummers becoming best drum corps in Munster and 2nd in Europe. The band were also places 6th at the European Pipe Band Championships held in Inverkeating Scotland

The band members have a lot of dedication traveling the length and breath of Ireland and the UK to compete and the competition season usually begins in May and concludes in August. Members also almost all year round travel all over Munster for weekly practices again showing fantastic dedication. Finally a thank you to all the people of Cullen, Duhallow, Kerry. and further aflield for all the support 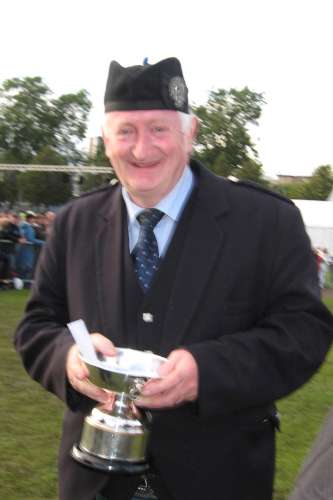 Con Houlihan with the Cup