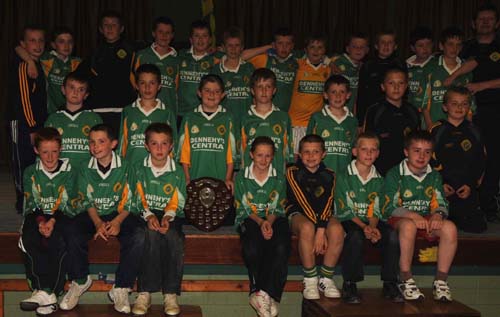 At the end of a glorious run, Millstreet emerged as a polished combination, their ferocious desire for victory confirmed on an outstanding team performance and greeted with rapturous acclaim at the full time whistle.

All through the contest, Millstreet put together a terrific work ethic, an assured defence formed an unyielding division, midfield established a firm control and the attack reaped a handsome return of scores.

The determination and the inspiration of the team was matched only by the enthusiasm of the team’s willing band of supporters that saluted Millstreet team captain Thomas Walsh on landing the county trophy.

Delirious supporters welcomed home the new county kingpins to a victory parade. Millstreet Pipe Band led a parade from Minor Row to a reception in the club’s Community Hall.

Club chairman Noel Crowley told those present that everybody was proud of Millstreet’s achievements and the feats of the side had passed their expectations. He thanked the players, management, parents and supporters for their huge encouragement.

Divisional Secretary Steven Lynch congratulated Millstreet on a fantastic win for the club and Duhallow. He applauded the work generated on the promotion of gaelic games in coaching, schools of excellence and summer camps.