Kilmeedy tower house is situated within the parish of Drishane and situated “on the confines of the baronies of Magonihy, West Muskerry, and Duhallow”. (Lee, P.G. 1914. Notes on Some Castles of Mid Cork: Journal of the Cork Historical and Archaeological Society. Guy and Co. Ltd: Cork. vol. 20. p. 63). The builders of the castle were the MacCarthys who were in control of the area at that time and were the owners/builders of such castles as Drishane, Carrigaphooca and Downyne (Healy 1988, 58).

There are conflicting reports regarding the exact date of construction of Kilmeedy tower house. The earliest date of construction is 1436 (Lee 1914, 64) while the latest quoted is 1445 (Lewis 1750, 498). It is fair to say that it was constructed in the early to mid fifteenth century at any rate. The castle is supposed to have been built by Dermot MacCarthy in 1436 or by his son Teige in 1445 (Healy 1988, 58). These were the MacCarthys of Drishane and were father and son and Dermot was the brother of Cormac Làidir of Blarney (Healy 1988, 58).

This tower house was built by the MacCarthys as they wanted to defend the pass of Keim between Musherabeg and Claragh Mountains (Healy 1988, 58). The main road (which it is just located off) was originally called the ‘Mail Coach Road’ and was the main road linking Macroom to Killarney (Lewis 1750, 498).

The castle was attacked in 1713 by the dispossessed Tadhg O’ Keeffe of Ballymaquirke (Healy 1988, 58). The Sliocht Meirgeach O Mahonys, “chief stewards of MacCarthy Mór” are also said to have had possession of Kilmeedy in the seventeenth century (O’Murchadha, D. 1985. Family Names of County Cork. Glendale Press: Dùn Laoghaire. p.232). One final note to add to this brief history is that in 1651, one of the inhabitants of the castle, Charles MacCarthy was shot dead by a “span’d pistol” at the grate of the castle by a Colonel Ingoldsby (Lee 1914, 64). One last piece of local legend associated with the tower house is that “the golden gates of Kilmeedy are reputed to have been thrown in Comeenatrush (lake) in the neighbouring townland”. (Kiely, E. 2003. Seanchas Duthalla, vol. XIII. Duhallow Historical Society: Cork, p. 45).

Dromtarriff church was burnt in 1652 by the troops of Lord Broggill (Lewis 1837, vol. 1, 509). There is a poem which states that the pikemen first hid in Knockbrack wood, and then ran for sanctuary in Dromtarriff Church – there were some fugitives and local people also in the church. (Shine, D. M. 2003. Seanchas Duthalla, vol. XIII. Duhallow Historical Society: Cork, p. 32). There is a commemorative plaque today within the grounds of the church (see fig. 1) which reads:

(The day after the Battle of Knockbrack)

By one of Cromwellian Lord Broggill’s Officers

Approximately 400 persons perished in the fire”.

Therefore it can be established that the church was burnt with tragic loss of life during the Cromwellian era. N.B. there is a difference of a year between the date given by Lewis (1837) and by the commemorative plaque (which was erected on the 6th of May 2006). One last point of interest is that there was a church burnt in Kilcorney (a few miles away) also following the battle of Knockbrack by the same people. (Tarrant, C. 1986. Seanchas Duthalla. Duhallow Historical Society: Cork, p. 56). The church is no longer extant but the crossroads is still to this day called the old chapel cross.

Written information on this fort is virtually non existent. Pat Kelliher mentions a fort in the glen, three or fourfeet higher than the surrounding surface and concludes that this is the fort’s surface. (Broker, T. 1937. Sràid an Muilinn: A history of it’s people, by it’s people, for it’s people. Timothy Broker, Millstreet, Co. Cork: Millstreet, p. 47). Broker claims (pg. 42) that the forts were abandoned around 1350 A.D. at the time of the Black Death. The only other information obtained was (from the landowner) that there are three ringforts (including this one) which are supposedly constructed in a line and are linked underground by passageways. 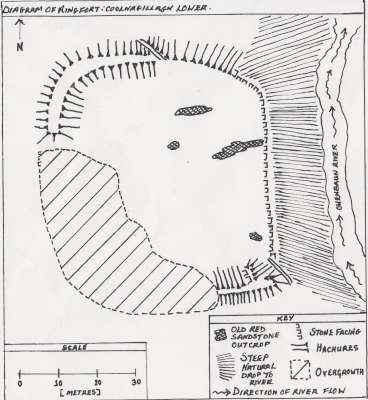 Location in Maps: Google Maps / 1890 OSI / 1840 OSI
It is on private farm land and accessible with the permission of the owner.

All the information for this section was sourced from the book: (Broker, T. 1937. Sràid an Muilinn: A history of its people, by its people, for its people. Timothy Broker, Millstreet, Co. Cork: Millstreet, p. 27).

The placename Knocknakilla was a source of dispute according to Broker’s book. It is outlined in the below quote:

“The Professor, however states that the name of the townland is Cnoc na Coille, not Cnoc na Cille. Not correct. On the other hand, Borlase who knew it was Cnoc na Cille, said the gallàn group was the Cill. Wrong again. The Cill was in Denis Buckley’s farm where a disused graveyard marks the site of an early Christian foundation”. Today, Denis Buckley’s farm is part of Millstreet Country Park – it is unknown today that there was such a cemetery – a good deal of his farm is in forestry.

There is a standing stone which measures six foot in height and five/six feet in girth in Con Lehane’s land in Abha Bàn, two miles off – this is said to have been thrown from Gallàn Croum in Knocknakilla by a giant (Broker, T. 1937, p.31).

Lackdotia in itself is an unusual placename. The most satisfactory sources regarding the origins of the placename were to be found online. The best that can be fournished as regards a translation from “Leaca Doite” is “the flagstone” (http://www.booksulster.com/library/plnm/placenamesVocL.php) “of fire” (http://www.englishirishdictionary.com/dictionary) or “the side of a hill” (http://www.booksulster.com/library/plnm/placenamesVocL.php) “of fire” http://www.englishirishdictionary.com/dictionary).

According to Broker, “Gallàn, 4 feet high and 5 feet in girth. A couple of feet outside it were 6 or 7 smaller stones arranged in a circle. Smaller stones were removed by James Kelliher in 1915 when ploughing. Smaller stones were like flags, 2 feet under and 2 feet over the ground. Circle was 6 or 7 feet in diameter”. (Broker, T. 1937. Sraid an Muilinn: A history of its people, for its people by its people for its people. Timothy Broker, Millstreet, Co. Cork: Millstreet. p. 28). The fact that there was a circle of flagstones around the standing stone links in with the first suggestion for the origin of the placename (the fire aspect may link to the idea of the gallàn as a sundial) but that is open to interpretation.

“Two wells in commonage of Mushera mountain – one at the top (for cattle) and one at the foot (for Christians). Not many go to the top well but five or six hundred come to the foothill well…Both wells are called ‘Tobar na bhFaithní’, warts being cured by washing in them”. (Broker, T. 1937. Sràid an Muilinn: A history of its people, by its people, for its people. Timothy Broker, Millstreet, Co. Cork: Millstreet. p. 35).

St. Johns Well was founded by Michael Buckley of Aubane in 1954 (O’Brien, 1987, p. 8). It is said locally that when Michael Buckley died (1956), a light travelled down from the site of the well along the path he took (when travelling to it) and came to rest on the bridge in front of the house. The light then disappeared – a lot of people in Aubane are said to have seen it.

St. John’s Well has been a place of worship since pre Christian times according to O’Brien. According to a legend, this St. John had one brother and three sisters; Lasair, Inghean Bhuide and Latiaran (of Cullen), and St. Berihert (who founded a monastery at the defeated stronghold of druids at Tullylease) (O’Brien, M. 1987. St. John’s Well. St. John’s Holy Well Committee: Aubane, p. 7/8). According to O’Brien, their feast days more or less match those of the pagan celtic deities, St. John’s being Midsummers day, the 24th of June. This would suggest that the well may have had significance in pagan times.

There was a pattern day held up to the year c. 1940 – it consisted of tents set up about a mile and a half away from the well on the Macroom side in the townland of Moulnahourna. There is said to have been entertainment (e.g. three card tricks), sweet and cake stalls, porter stalls and even fights, sometimes involving factions. (O’Brien, M. 1987. St. John’s Well. St. John’s Holy Well Committee: Aubane, p. 8).

To sum up the recent history of the well, (as already mentioned) it was founded in 1954 by Michael Buckley. In 1958, there was a statue of the Infant of Prague placed at the well and it was blessed by Canon Costello of Millstreet. Mass was first celebrated at the well in 1974 and has been celebrated annually ever since. The Stations of the Cross were erected and blessed in the eighties. (O’Brien, M. 1987. St. John’s Well. St. John’s Holy Well Committee: Aubane, p. 8/9). The site is continuously been kept to this day by the St. John’s Well Committee.

Carrigonirtane: from the Irish Carrig an Fheartàin which means ‘Rock of the little vault or trench’. (O’ Connell, 1988. p. 143).

As well as giving the name to the townland, the monument has given its name to the field which it is located in, i.e. “Phile a’ Chalir”. (O’ Connell, 1988. p. 140). This (according to O’ Connell) has something to do with the fact that the megalithic (wedge) tomb is shaped like a table.